The end of May seems to mark the beginning of a fun season in wildlife photography - the birth of the endangered Piping Plover (PIPL) chicks.  For me, this would be my first time getting to photograph these charismatic little birds, and while exhausting, it was an adventure that I wouldn't have wanted to miss.

The excitement began on Saturday morning, June the 3rd.  After seeing photos of the PIPL chicks online from a few other photographers in the preceding week, I was anxiously awaiting the weekend when I was hoping to make my own trip to the Central New Jersey coast.  The plans were set; a couple good friends of mine and myself would meet up at this particular beach side location at dawn and make the short walk out to the surf.  With some luck, we'd have a beautiful sunrise and glowing golden light to really set off our photos.  Sure enough, Saturday morning, after a 2.5 hour drive from Pennsylvania with my good friend Nick, we arrived to find the sun setting the sky on fire with purples, reds, and orange shades.  Unfortunately for us, the beauty would be short lived as a large cluster of storm clouds loomed in the background, slowly making its way our direction.

Arriving on the beach, we quickly tried to find a few birds to photograph but with it being the start of the day, and our first time there, this wasn't an easy feat.  While we weren't immediately able to locate any PIPL chicks to photograph in the stunning light, we did find a few American Oystercatchers and a very cooperative adult PIPL which you can see pictured above.  This little fellow seemed determined to show off for us - running right towards our group as we lay there in the sand.  At one point, it came within <5 feet of me, too close for my camera to focus, before continuing along the stony shore.  I slowly managed to spin myself around and re-position in the sand, shooting almost directly into the sun.  This however gave a really cool coloration and light to the photo seen here to the right.  You'll notice how the out of focus areas really show off a beautiful bokeh.  The unfortunate part that I've learned to more or less deal with when shooting into the sun is my cameras (and most for that matter) inability to lock very tack sharp focus.  Oh well...

As the sun continued to push towards the shelf of clouds, I scrambled to find a few more birds to photograph.  Unfortunately, the Plovers were not being very cooperative.  It really wasn't until about 30 minutes after the sun disappeared into the clouds that we got our first good look at a mother PIPL and her young together.  Appearing very stealthily in some shell-strewn sand, the mother lead the chicks across the path and into a roped off nesting area.  With the little ones not far behind, the mother picked a spot, and called to the chicks, sending them running and diving into her plumage.  We clicked away on our cameras as the adorable scene unfolded resulting in a few shots like the one below showing mom and multiple other legs that clearly aren't hers.  Hidden inside all of that fluff are her tiny little chicks, warming up on what was rapidly becoming a very chilly, windy morning.

Nick and I continued watching the same general area for the next hour or so as the weather conditions continued to deteriorate.  In between shots, we checked our phones, scoffing at the radar images that we were seeing and trying to will away the large swath of rain that was heading our way.  You have to understand that after waking up at 2am (earlier in Nick's case) and then driving 2.5 hours to get to this spot, we weren't really prepared to have to pack up and leave again after only getting a few shots.  Unfortunately, the weather had different plans and despite the forecast calling for sunny skies a mere day and a half prior, such skies were not to be had.  As the rain started to fall we lamented whether we could stay and continue to shoot.  Photos of Plovers in the rain could produce some unique results!  That thought process was cut short however once the wind picked up and the sand started blowing.  If there's one thing I've learned (especially after the Snowy Owl trip to Chincoteague) it's that expensive camera gear and blowing sand do not mix.  I managed to get one other shot on Saturday morning, seen below,  that I really liked despite the unfavorable lighting conditions.

We made our way back to the car.  It was bittersweet...we got to see what we came for which was AWESOME, but, the weather could have been better.  You get used to this in wildlife photography, but it's never easy to reconcile.

2am, Sunday June 4th, 2017 - Yeah...that's right.  Saturday wasn't enough for me, and I like to punish myself apparently.  After getting home around 11am from the first trip Saturday, I started thinking to myself "that wasn't so bad...I could probably make that drive again".  Really, who wouldn't want to wake up at 2am, two days back to back, drive at least 5 hours round trip (both mornings)  to spend 2-3 hours laying in trash covered sand photographing tiny, SPEEDY birds.  I know, I make it sound so glamorous.  It really was a ton of fun, however frustrating and exhausting at times.

Anyway...after solidifying my decision to do it again, I loaded up on snacks (again) and hit the hay just after 8PM (the sun wasn't even set yet...).  Morning came around quick, but I was on the road by 2:20am.  I ended up arriving at the location a bit earlier than expected and had to wait to enter, but once inside I was pleasantly surprised to find that I was the only one there.  The sun was starting to light up the sky, so I quickly made my way down the trail.  About half way to the beach, I actually encountered a herd of deer in the velvet.  I cool and unexpected site!

Similarly to the day prior, I hit the beach and immediately started trying to find a few avian subjects to photograph.  While I wasn't going to be racing the loss of the sun on the beautiful clear morning that Sunday turned out to be, I was going to be racing the sun becoming too bright and blowing out highlights.  I also wanted to try and get a few shots in the beautiful golden glow of sunrise.

Within a few minutes I was able to locate an adult PIPL with a number of chicks following her around.  I got in position on my belly in the sand and waited.  She quickly found a nice spot and plopped down, making a few short calls to the chicks who weren't far behind her.  If I recall, the sun was just barely making its way over the horizon when I snapped the shot to the left, but I was excited to get a nice close-up of the mother and chicks so early.  The sun broke over the horizon and the beach was painted in golden light.  I stood up to assess what other birds were around, and spotted another adult Plover nearby.

Shooting into the sun is something I've been experimenting with when the opportunity presents itself.  After seeing some of the incredible results that some fellow photographers have come up with, I thought it might be fun to see what I could do.  The adult PIPL stood pretty still, giving me this somewhat humorous glare as I tried to sneak in for a few close-ups.  After a few minutes of direct-into-the-sun shots, I noticed the glowing NYC skyline off to my left.  Thinking that it might make for an interesting backdrop, I adjusted, quickly but as smoothly as possible, shifting about 90 degrees.  Shockingly, the Plover stayed in the same spot, continuing to watch me.  I lined the shot up so that the city was right behind him and took a few shots at f/18 thinking that maybe I could get a deep enough depth of field to show off some of the city structure.  While cool, the shots weren't exactly what I was hoping for so I went back to a wide open f/4.  The photo on the bottom was the result - a beautiful glowing bokeh - the sun reflecting off the various skyscrapers including One World Trade Center (Freedom Tower), which is the glowing orb right above the Plovers head. 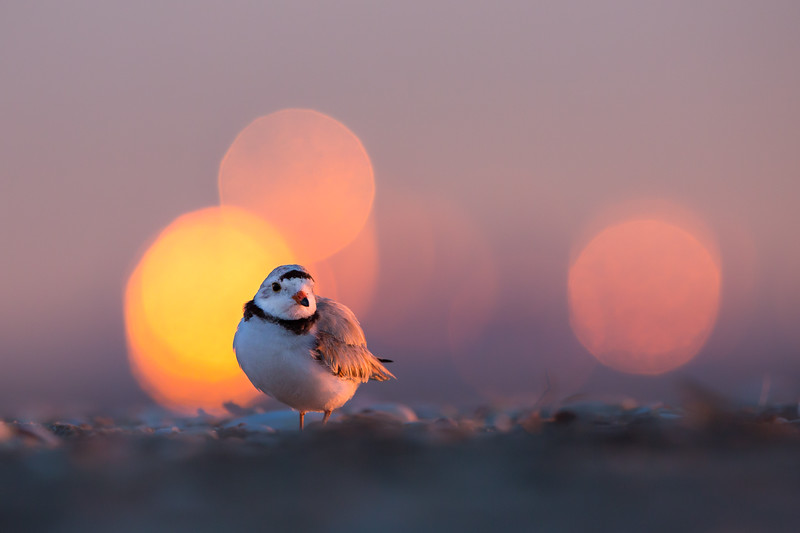 As the morning progressed, I was super fortunate to find some very cooperative adults and chicks.  It took a little for them to get used to me being nearby, but once they did, they put on quite a show.  I continued to crawl, crouch and maneuver around in the sand to try and get as many shots as I could while the chicks darted between sand piles back and forth between their nesting area and the water.  The resulting set of photos were all taken before about 8am when the sun was finally high enough in the sky to start blowing out the highlights.  At this point, I decided that with nearly 1200 photos over the last 2 days, I had enough and had gotten plenty of shots that I could be proud of!

This trip/opportunity was something that I had been looking forward to since last year when I first learned about the Piping Plovers and their adorable little fluff ball chicks and honestly I couldn't have asked for a better experience.  As I mentioned at the start of this post, Piping Plovers are an endangered species, which makes getting the chance to photograph them even more special.  While their numbers have improved over the last two or three decades thanks to continued conservation efforts, they still struggle due to continued climate and man-made pressures on and around their nesting areas.  As is always the case in wildlife photography, it's imperative to keep the well being of the subject well above the need for photos.  This is especially true with these little guys.  Thankfully they seemed more than happy to show off and I'd like to think that the few of us photographers that sprawl across the sand help to alert other beach-goers, like the number of folks fishing, to be on the lookout for these exceedingly tiny birds.

If you've come this far, thank you...and I hope you've enjoyed reading about this experience as much as I enjoyed partaking in it!  If you're interested in the continued conservation of these cute little birds and/or helping out with a donation, the Conserve Wildlife Foundation of New Jersey is doing great work to make sure Piping Plovers can continue to successfully breed on the states beaches.